In the film, Dr. Ryan Stone is a brilliant medical engineer on her first shuttle mission, with veteran astronaut Matt Kowalsky (George Clooney) in command of his last flight before retiring. But on a seemingly routine spacewalk, disaster strikes. The shuttle is destroyed, leaving Stone and Kowalsky completely alone–tethered to nothing but each other and spiraling out into the blackness. The deafening silence tells them they have lost any link to Earth…and any chance for rescue. As fear turns to panic, every gulp of air eats away at what little oxygen is left. But the only way home may be to go further out into the terrifying expanse of space. Gravity hits 3D, 2D and IMAX 3D theaters on October 4.

Michael Crichton’s cult classic Westworld, which imagines a Wild West-themed vacation destination inhabited by robots, is coming to HBO. The pay network gave a pilot production commitment to the project from J.J. Abrams, Jonathan Nolan (Person of Interest), and producer Jerry Weintraub (Behind the Candelabra). The logline for the adaptation of the 1973 film reads: “Set in the amazing world dreamt up by Michael Crichton, Westworld is a dark odyssey about the dawn of artificial consciousness and the future of sin.” Nolan and Lisa Joy will write and executive produce the series; Nolan is set to direct the pilot. This is not the first time Westworld has made its way to the small screen. A very short-lived 1980 series starring James Wainwright and Connie Selleca called Beyond Westworld continued the story from the film and its 1976 sequel Futureworld. The original film starred Yul Brynner as the robot gone awry while James Brolin and Richard Benjamin starred as tourists who got more than they bargained for. Check out the original trailer below:

Another high-profile name is eyeing a role in director James Wan’s Fast & Furious 7 as Variety reports that Kurt Russell is in talks to play an undisclosed role. He would join Vin Diesel, Paul Walker, Jason Statham, Ronda Rousey, Tony Jaa and Tyrese Gibson with many more franchise favorites expected to be confirmed in the days to come. Russell’s career has been relativity quiet since his role in Quentin Tarantino’s Death Proof in 2007. He was planning on re-teaming with Tarantino for last year’s Django Unchained, but left that project mid-production. In 2011, Russell starred in the football drama Touchback. Although his role in Fast & Furious 7 is unknown, the trade notes that it was initially offered to Denzel Washington. Continuing from the cliffhanger tease at the end of Furious Six, Fast & Furious 7 is said to return the action to Los Angeles, although the production is eyeing an Atlanta shoot with a planned release date of July 11, 2014. Source: Variety VIA ComingSoon

Following a rumor that originated earlier this week at Blue Sky Disney, The LA Times has now confirmed that Up co-helmer Bob Peterson has been removed as director of the upcoming The Good Dinosaur. A replacement has yet to be named, but Disney•Pixar says that the project will still meet its May 30, 2014 release date. “All directors get really deep in their films,” says Pixar Animation Studios president Ed Catmull.“Sometimes you just need a different perspective to get the idea out. Sometimes directors… are so deeply embedded in their ideas it actually takes someone else to finish it up. I would go so far as to argue that a lot of live-action films would be better off with that same process.” The Good Dinosaur is set to feature the voice talents of Lucas Neff, John Lithgow, Frances McDormand, Bill Hader and Neil Patrick Harris. The storyline asks, “What would have happened if the cataclysmic asteroid that forever changed life on Earth actually missed the planet completely and giant dinosaurs never became extinct?” Peterson, who is also well-known for his Pixar voicework, starring …

VIEW MORE CAST PORTRAITS OVER AT EW.COM BY CLICKING THIS LINK.

World-renowned poet and playwright Seamus Heaney has died at the age of 74. Mr Heaney died in hospital in Dublin this morning. He had been in hospital after suffering a short illness, his family said in a statement. Mr Heaney was awarded numerous prizes over the years and won the Nobel Prize in Literature in 1995. He was born to a farming family at Mossbawn near Bellaghy in Co Derry on 13 April 1939. He was the eldest of nine children to Margaret and Patrick Heaney. His upbringing often played out in the poetry he wrote in later years. Mr Heaney was educated at the St Columb’s College Catholic boarding school in Derry. He later studied at Queen’s University Belfast, before making his home in Dublin, with periods of teaching in the United States. His poetry first came to public attention in the mid-1960s with his first major collection, Death Of A Naturalist, published in 1966. As the Troubles in Northern Ireland took hold later that decade, his experiences were seen through the darkened mood of his work. Other collections included: Door into …

Earlier today, ComingSoon’s Edward Douglas interviewed the Clash of the Titans director about the DVD of his Summer smash, and he confirmed to them that he will return for the sequel. when talking to Leterrier about the extras on the DVD and Blu-ray earlier today, the director mentioned that the long version of the first movie also includes a scene they shot that sets up a possible sequel. He told us why they removed that scene from the original movie. “It was sort of ending up (with the movie) in ‘onto further adventures,’ which is fine, but we don’t really do that. We had a scene that we kept and when Lionsgate and Summit said, ‘Yeah, let’s do a sequel,’ I said, ‘Okay let’s put it on the DVD and do the longer cut. It’s after the credits, but I was very conscious of not jinxing it. This summer I saw a couple of movies where they had ‘sequelitis’ and you totally jinx it, but this was only for the DVD and only for the Blu-ray.” … 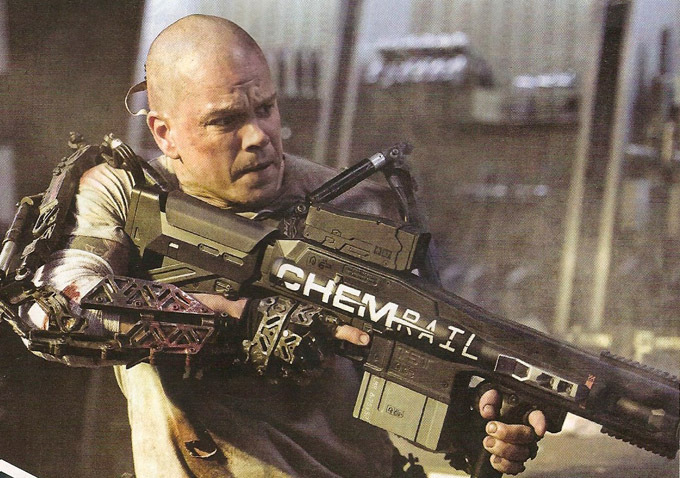 Production has already begun on Christopher Nolan’s upcoming film Interstellar and it already boasts an impressive cast, but the filmmaker has added one more to the roster. According to The Playlist, Elysium star Matt Damon has been cast in the film in a “small, undisclosed role,” continuing Nolan’s trend of secrecy regarding his characters. Interstellar‘s ensemble cast also includes Matthew McConaughey, Anne Hathaway, Jessica Chastain, Bill Irwin, John Lithgow, Casey Affleck, David Gyasi, Wes Bentley, Mackenzie Foy, Timothée Chalamet, Topher Grace, David Oyelowo, Ellen Burstyn, Elyes Gabel, and Michael Caine. Directed and co-written by Christopher Nolan, the film chronicles the adventures of a group of explorers who make use of a newly discovered wormhole to surpass the limitations on human space travel and conquer the vast distances involved in an interstellar voyage. Interstellar will be released in regular and IMAX theaters on November 7, 2014.

… And so Dome becomes Breaking Bad for one episode. Scenes of Dean Norris in tense stand-offs with gun-toting people and riding around in speed-boats were probably done in reshoots thanks to BB‘s current HUGE success. As an episode, it was pretty poor. The very enjoyable Joe-Norrie scenes of recent weeks were reduced in number, despite a thrilling final sequence where Joe, Norrie, Junior and Angie all touched the mini-dome and the egg, as expected, projected a sort-of planetarium around the barn. Alexander Koch’s acting as Junior is getting better and better, as the character transforms from murderous psychopath to relatively well-meaning and sympathetic protagonist. Barbie, whom I have NEVER trusted on the show, is finally proven to be evil, even as he is forced to enter a VERY BORING fight-club ring. The finale isn’t for three weeks, so there’s lots of time left for excitement… UNDER… THE… DOME.

Paramount Pictures is giving moviegoers a chance to see two of its summer blockbuster films, Star Trek Into Darkness and World War Z, with a special double feature at select AMC Theatres, Carmike Cinemas, Marcus Theatres, Regal Cinemas and other participating theaters nationwide in RealD 3D and 2D. Beginning Friday, August 30th through Thursday September 5th, the double feature allows fans to relive the excitement of two of the summer’s biggest hit films for one ticket price. Tickets are on sale now at http://www.UltimateDoubleFeature.com, fandango.com, movietickets.com and at participating theatre box offices. Star Trek Into Darkness, directed by J.J. Abrams, follows the crew of The Enterprise as they are called back home to Earth in the wake of a shocking act of terror from within their own organization. In defiance of regulations and with a personal score to settle, Captain Kirk leads his crew on a manhunt to capture an unstoppable force of destruction and bring those responsible to justice. As our heroes are propelled into an epic chess game of life and death, love will be challenged, friendships will be torn …

Following a series of online teases, Vin Diesel finally revealed earlier this month that he’s planning on playing Groot in director James Gunn’s now-filming Guardians of the Galaxy (although he does admit that the deal is not yet fully complete). At today’s junket for Diesel’s latest, Riddick, ShockTillYouDrop.com’s Ryan Turek asked the actor about the role and whether or not his portrayal of Groot would be limited to voicework. “It’ll be voiceover, MoCap and all of that stuff,” Diesel says. “It’s going to be super cool.” That means an awfully busy schedule for Diesel, who begins production next week on James Wan’s Fast & Furious 7. In a separate interview with The Hollywood Reporter, he explains that his upcoming slate is actually what brought the Groot role his way. “What we were intially talking about was a fresh IP,” says Diesel, “and that was the focus of our conversation. A fresh IP that would come out in 2016 or 2017 to potentially launch a third phase. When we went to Comic-Con, we realized that we wanted something more immediate.” So what intellectual property was Diesel …